Mistress Natasha was dying to try trampling fetish. She did not have a slave to try it on so she had to do it on her boyfriend. So she teased him and she taunted him about how weak he was. He wanted to prove her wrong so he allowed her to test him. She agreed and that way, she had found a way to try her trampling fetish without much hassle.

Lady Krasaviza tied this guy to a chair after she had stripped him naked. He was responsible for the loss she had incurred in her business. She wanted him to remedy the situation but he refused. It was in his power but he did not want to do it. So she tied him up and she burned his balls and his nipples with a candle. She told him the choice was his to tell her and escape the resultant paid or endure it. He chose to tell her.

Princess Serena was sure that her slave was hiding something. But she was not sure what he was hiding. She chose to humiliate him in order to make him tell her what it was that he was hiding. So she crushed his face using her bare feet. He braved the pain but when it became too much, he told her everything so that she could let him go. She did not let him go immediately.

Mistress Suzy did not like how her boyfriend snored at night. She tried to ask him to get help but he refused. His snoring was getting on her nerves and today she snapped. She cruelly trampled his face using her bare feet. She smothered his face using her feet and she nearly choked him as she did this. She then forced him to go and get help when morning came.

This mistress slapped her slave because he had not followed her instructions. She wanted him to learn a lesson so she cruelly taught him the lesson. She slapped the shit out of him and she did it both with her hands as well as with a whip. She was not done as she crushed his hands as well as his ribs and stomach with her high heels. He had never felt that much pain in his life.

Madame Marissa had dirty and smelly hunter boots. She had asked her slave to do something for her but he had not done it by the time she came back. She did not hesitate to punish him. She used the same smelly and sweaty hunter boots to humiliate him. She made him lick them and he had no choice but to do what she ordered him to do. He learned his lesson.

Mistress Melissa plays with her boyfriend

Mistress Melissa wanted to have a little fun with her man. She went to the bedroom and found him resting on the bed. She got on top of him and she facesat on him. He understood what she was doing and he licked her ass naughtily. He loved how he did it and he turned her on as he did it. She even lay on the bed and he did it from behind. 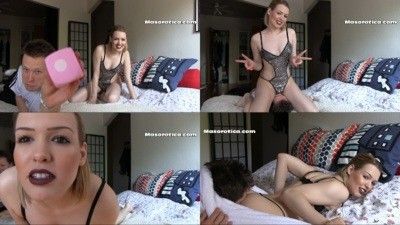 This mistress loves her peace and quiet. But this loser disturbed it and he had to be shown the consequences of doing so. So she asked him to lick her bare feet. He hesitated and she told him she was not requesting but it was an order. He licked her feet as she chatted with her friends on phone. She also had him lick the soles of her high heels.

Mistress Asia crushes slave as punishment and as exercise

Mistress Asia could not go to the gym because her slave had forgotten to buy her gym outfits. She was pissed and she had to exercise on his body instead. She used her sneakers to trample him, stomp on him and jump on him as exercise. She crushed him from head to toe to both teach him a lesson as well as to exercise because she did not want to lose that day.