All articles tagged with "Foot Slave"

This mistress was out to degrade this girl and she did so using her boots. She took her to a muddy patch and she threw her down and she trampled her. In addition to trampling her, she made her lick her muddy boots and even do the same to the car tires which were also full of mud. That is how the girl realized that she could not mess with the mistress.

Goddess Stephanie uses facesitting to get even

Goddess Stephanie had beef with her man because he did not help her around the house. He loved to play video games when he got home and he did not even have time to hang out with her. She was so pissed off at him for not changing despite her telling him to change those habits that she used her ass to punish him. She facesat on him while playing his video games and let him learn his lesson. 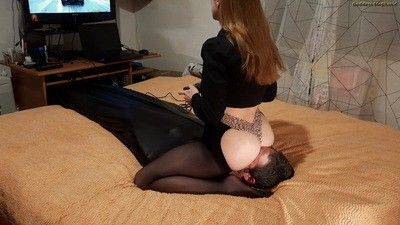 Mistresses torture couple for being cons

This couple loved to con people and they were so smooth that they always got away with it easily. But today they were not so lucky as they ended up pissing off these mistresses and they did not like it. They lured them to their house where the mistresses stripped them naked and whipped them after tying them to a pallet. They were whipped on their balls and on their nipples.

Mistress cruelly tramples girl for gossiping too much

This mistress was angered by the way this girl gossiped. She did not want to be involved in her gossiping and so she did what she does when confronted with such a situation. She cruelly trampled the girl and made her lick her feet before she felt that she was done with her. The girl regretted pissing her off and she begged for mercy and said she would turn over a new leaf.

Mistress ballbusts guy for being naive

This mistress expected this guy to know his stuff and that is why she was pissed at him when she realized that he was naive and he ended up costing them a lot with his naivety. The mistresses invited her friend and both of them kicked the guy in the balls to make him assure them that he would never be naive again in his life and that he would make up for his mistakes.

Mistress Zetah chokes slave for talking back at her

Mistress Zetah felt that the way her slave was talking back at her was a sign of disrespect and she did not let it go on. The mistress cruelly choked him as a way to send a message to him that she would not tolerate such behavior. As she punished him, he peed his pants and begged to be forgiven claiming that he had learned his lesson and would not talk back at her again.

Goddess Fiona had tried her best to rehabilitate and make this slave change but he was a difficult person. She decide that she needed to change tact so she used her whip to punish him and in no time, the mistress had managed to torture and humiliate him in a way he had never been before. That was when he regretted what he had done and he knew he had to change.

Mistresses gang up against cheater

When this mistress messed with the wrong mistresses, he had to learn his lesson so that whatever he had done would not be repeated. The mistresses learned that he was playing them and they immediately put an end to that nonsense. He was forced to endure ballbusting and humiliation as they trampled the hell out of him and forced him to lick their feet before they were done with him.