Madame Marissa did not like how lazy her slave was and she had to do something. She invited her friend and they had fun at the expense of the slave. The mistresses used their feet to crush his hands. It was his hands that were lazy and they wanted to make sure he did something about it. So they crushed, trampled and jumped on his hands. He had never felt that much pain before.

Mistress Alisa was getting late for work but she wanted her feet and her shoes to be prepared for work. Her slave had forgotten to clean them and she was not going to permit it. She got him to lick her bare and smelly feet before using the same feet to trample and degrade him. He regretted what he had done and tried to beg for mercy but it was too late.

Mistress Katia did not like how late her boyfriend was for their picnic. She was about to finish the food when he came. By then, she was already pissed and she took out her anger on him. She forced him to endure her trampling and other forms of punishment she had in store for him until she got satisfied that he had learned a lesson and done it the right way.

Goddess Lena caught this old man doing perverted things and he could not stomach them. She had to make him realize that what he was doing was wrong so she used him as her human ashtray before using him as her human punching bag. She did all that she could do and she liked it. She was impressed by what she had done to him today then she let him go.

Mistress Cama was not pleased with how disobedient her slave had become. She chose to dominate and to torture her slave using her whop, her feet, and her humiliation. She used them with the mastery of a pro and she got him apologizing and promising never to disobey her the way he had done it. He agreed and he did all the things she wanted him to do without question.

Madame Marissa was misled by her employee and she was mad as the advice turned out to be bogus and it did not help her. She lost money as a result and she had to make him pay for it. She did this by facesitting on him and choking him using her big ass. She warned him never to give her information if he was not totally sure of it.

Mistress Sasara did not see any value that this loser added to her life. She chose to run a lean and mean operation and that was why she was surprised at how he tried to adapt to what she was doing. But she changed styles often and she did all kinds of things that were on his head. She then chased him away as she did not need him anymore. 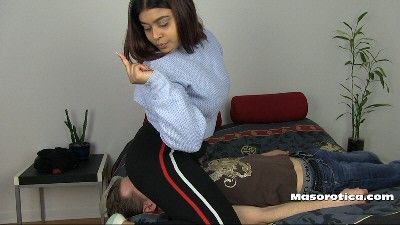 Lady Shay humiliates slave for waking her up

Lady Shay was tired because she had come back to the house in the morning from the club. But her slave did not know that and he tried to wake her up. She was pissed as she had not had good sleep and she humiliated him using her shoes and her socks which she was still wearing. She forced the poor guy to lick them and warned him not to wake her up.

Princess Serena likes to try different punishment methods because she does not want to be known as a one trick pony. She chose to have her slave lick her boots and sniff her ass. She made specifically lick her soles and she did just about anything that came to her mind. She enjoyed it although it was pure torture for the poor guy who could not even say a word.